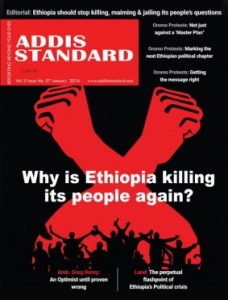 (Robemedia) Since 1991 Tigray People Libration Front (TPLF) government have been killing many Ethiopians. Specifically,   Oromo people have been targeted after they come to power since 1991. Almost,  any Oromo men and woman who have soft heart for its own people have been target by minority Tigrean regime. Since then, they almost hijack, kill or jail Oromo nationalist in the name of Oromo Libration Front (OLF), a prominent political Organization that struggle to secure the political, economic and social interest of Oromo people. The question is why TPLF fascist kill the Oromo?

The obvious reason should be economical. The TPLF have openly preaching, they have a dream to lead Ethiopian for the next 100 years to make Tigreans  a prosperous at the expense of the rest  of Ethiopians. The Tigray nationalist openly say they want to rule Ethiopia as much they can to make the Tigreans the power house of the horn of Africa ( a foolish dream),  and if they don’t the will have article 39 of the constitution as a deposit to establish the greater Tigray.Endowment Fund for Rehabilitation of Tigray (EFFORT) companies mainly operate in Oromia, if the don’t kill the Oromo people, it is impossible  for the EFFORT companies to accumulate a greater wealth for the greater Tigray dream form  Oromia. Unfortunately, their dream have gotten a big setup from the Oromia front. It’s impossible for minority Tigreans to rule Oromia through mercenary army.

It is about time time, the Tigray fascism will be  a history. The struggle for Freedom and Democracy continues! Ethiopian from all corner have  a huge grievances toward  the Tigray minority regime, hence the people have no choice except to fight the criminal regime that kill, rape and jail them. Oromo struggle is the reflection of an accumulated grievances toward the regime. Gonder flooded with protest against the Tigray fascist group! have joined... The tragic truth of land grabbing for Biofuels in Ethiopia