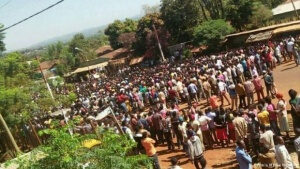 Rights groups claim that Ethiopian security forces have killed at least 140 protesters. The Ethiopian foreign minister is in Brussels to answer questions by members of the European Parliament on the alleged offences.

(DW/Deutsche Welle – January 13, 2016) – Human Rights Watch (HRW) last week alleged that Ethiopian security forces “have killed at least 140 protesters and injured many more.” Opposition parties and activists asserted thousands of Oromo protesters had been arrested and injured since the protests started in mid-November.

In a surprise move on Wednesday (13.01.2016), the Oromo Peoples’ Democratic Organization (OPDO) party, which is part of the ruling coalition, announced that it wanted to halt the so-called “Addis Ababa Masterplan” which is at the root of the ongoing crisis. The plan involves the expansion of the capital into the surrounding Oromia region. Government spokesman Getachew Reda told reporters that the government would respect this decision, but that they would still prosecute those who had participated in the protests.

The plans to expand Addis Ababa were hotly contested by members of Ethiopia’s largest ethnic group. Universities across the country turned into battlefields, with police firing live bullets to disperse the crowds. On social media, Ethiopians united under the hashtag #OromoProtests and Ethiopians of all ethnic backgrounds staged vigils all around the world.

On the eve of the hearing of Foreign Minister Tedros Adhanom in Brussels, rights groups insisted that EU officials “should convey serious concerns about Ethiopian security forces against the Oromo protesters.” Read More