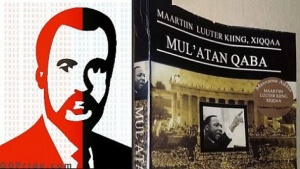 News broke out that Mr. Bekele Gerba, the Deputy Chairman of the Oromo Federalist Congress (OFC) and an Oromo Ethiopian peace activist, was arrested by the Ethiopian government for a second time in five years on December 23, 2015. It has been more than 20 days since his arrest from his home in Adama, in the Regional State of Oromia; however, according to the latest report, no member of his family or fellow leader from OFC has been allowed to visit him in prison. The government, going against the Constitution, has not brought him to the court yet neither. According to the Human Rights Watch report, Mr. Bekele Gerba is incommunicado; his whereabouts are unknown.

Before his second arrest a couple of days before Christmas 2015, he had only been free for about 9 months; he had been imprisoned, as a prisoner of consciousness, in several inhumane Ethiopian prisons for four and half years prior to that. During that prison time, which began in August 2011 – days after meeting with Amnesty International, the UK-based human rights organization, to discuss about the conditions of none other than human rights in Ethiopia, Mr. Bekele Gerba translated Dr. Martin Luther King, Jr.’s (MLK’s) posthumous work, “I Have a Dream: Writings and Speeches That Changed the World,” into Afan Oromo, the language of the Oromo people, who constitute the largest ethnic group in Ethiopia. The title of the Afan Oromo book is “Mul’atan Qaba: Barreeffamootaa fi Haasawwan Addunyaa Kana Jijjiiran.” Mr. Gerba believes the decades-old political and socio-economic marginalization of the Oromo people in Ethiopia can be conquered through nonviolent means; during his brief freedom in 2015, he toured several North American Oromo communities to declare and assert this position of his and his party’s, OFC’s, and lobby support from the international community.

As U.S.A., and the world, pause this week to remember Dr. Martin Luther King, Jr., the leader of America’s Civil Rights Movement and the 1964 Nobel Peace Prize winner – and a role model for Mr. Bekele Gerba and Oromo protesters across Ethiopia, activists and peace-loving citizens around the world have continued to demand the international community to break its silence and send a stern message to the Ethiopian government to stop the carnage in Oromia; the Ethiopian government has, over the last two months, intensified the killing, maiming and arresting of Oromo protesters, human rights activists, journalists and opposition leaders (of which Mr. Bekele Gerba is one among the thousands of Oromos arrested). Human rights activists and peace advocates have used protest arts (including songs, poems, graphics, short films and documentary films), rallies, petitions (1, 2), sit-in/camping, media appearances (1, 2, 3, 4), and appeal letters to bring the atrocities, some of which have been caught on tape, of the Ethiopian government against Oromo protesters, human rights activists, journalists and opposition leaders to the attention of the international community. On this MLK Day 2016, the Oromo just protests against injustices: land dispossession, economic marginalization, linguistic tyranny, denial of self-rule, and lack of freedom of speech, of the press and of assembly, have continued all over Oromia and Ethiopia. On this MLK Day 2016, the will of the people continues to prevail in Ethiopia.

Al Jazeera reports on the latest about Mr. Bekele Gerba: Endowment Fund for the Rehabilitation of Tigrai (EFFORT) report A Conversation with the Ethiopian Political Opposition ( The Africa Center)