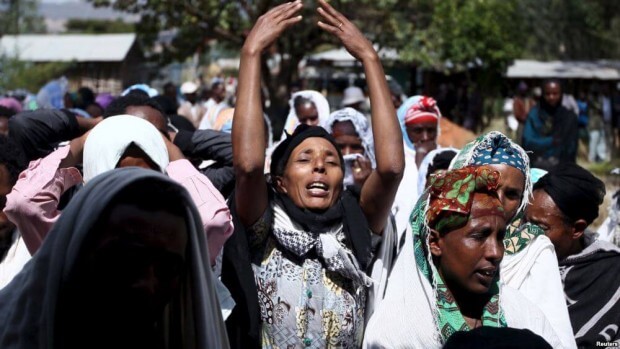 At least 27 protesters from the Oromo community, Ethiopia’s largest ethnic group, have been allegedly killed since the government announced it would scrap a plan to expand the boundaries of the capital Addis Ababa, which triggered mass demonstrations. Protesters in Oromia, one of the nine ethnically-based states of Ethiopia, have continued to demonstrate, arguing they did not trust the statement from the Oromo Peoples’ Democratic Organisation (OPDO) released earlier in January.

A demonstrator told IBTimes UK on conditions of anonymity: “21 peaceful demonstrators were killed yesterday [18 January] and six people are said to have been killed today. It’s really so tragic.”
The number adds to the already more than 140 people allegedly killed by security forces since protests started in November 2015 after the government announced the so-called “Addis Ababa master plan.”
More about Oromo people

Who are the Oromo people, Ethiopia’s largest ethnic group?

The source alleged that the government deployed special forces, known as Liyu Police, into Oromia towns such as Bedeno and Dire Dawa. Liyu police – formed of Somalian soldiers – was created by the Ethiopian government in 2007 to halt the rise of Ogaden National Liberation Front (ONLF) separatist group. The special forces have been accused of committing crimes including extra-judicial executions. Read More Oromo has won TPLF when they burned Melese idol 4 month...