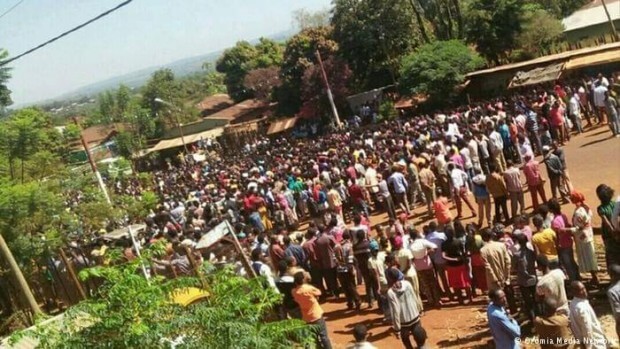 The number of Oromo civilians killed, maimed, tortured, disappeared and raped by Ethiopian government forces has been increasing after Ethiopia’s Foreign Minister Dr. Tedros Adhanom met with the European Union and US Ambassador to the United Nations Samantha Powers. Ignoring concerns by the EU and Ambassador Powers over Ethiopia’s government’s violent responses to peaceful Oromo protesters, Tedros’ government has continued with the killings and many other forms of atrocities against the Oromo people, including killing children.

The number of state-led killings has now increased to 185, according Abiyi Atomsa, an Oromo activist who provided the “minimum death tolls”. Another source, Ethiopia Crisis, a group that monitors the crisis and provides updates on the violence, reported on January 29, 2015 that the number of people killed for peacefully protesting against the government over land grabbing “exceeds 200.” A month ago, Human Rights Watch reported that 140 members of the ethnic Oromo were killed for protesting a government plan to expand the boundary of Addis Ababa city into Oromia regional state by evicting Oromo farmers. HRW stated “arrest of respected politician” Bekele Gerba, Deputy Chairman of the Oromo Federalist Congress, marked the escalation of the crisis.

The European Union Parliament, which correctly assessed the crisis and debated on it and passed a 15-point “resolution on the situation in Ethiopia”, is the only international actor with concrete plans to curb massive rights abuses by the Ethiopian government in Oromia if and when this monumental resolution is translated into actions. Not only did the EU parliament condemn the excessive use of violence by government forces against peaceful protesters, it also called for impartial investigations into killings and other human rights violations and for the prosecution of responsible government actors. More importantly, the EU made it clear that aid to Ethiopia will be contingent upon the protection of human rights going forward. The resolution “stresses that financial support to Ethiopia from the EU should be measured attending to the country’s human rights record and the degree to which the Ethiopian government promotes reforms towards democratization, as the only way to ensure stability and sustainable development.”

Contemptuous of the EU and concerns of Western nations providing aid, $3 billion amounting to half of Ethiopia’s national budget, the Ethiopian regime has not taken any steps to de-escalate the situation. In fact, it’s escalating the use of lethal force against unarmed protesters in Oromia and Gambella regions.

The United States government has failed to follow the good example set by the EU parliament; the US does not yet have a concrete plan to curb the unfolding crimes against humanity against the Oromo population by the Ethiopian state. Despite a stark omission of violence against the Oromo protesters by Ethiopian government from a recent White House National Security Council statement, the State Department and some US diplomats have publically expressed increasing levels of concerns about the killings in Oromia, and urged the Ethiopian government to “allow peaceful protests” and called for “a meaningful dialogue about Oromo community [people’s] concerns.”

While increasing expressions of concern are welcome by the Oromo people, all these statements from the US government lack any concrete plans on how to stop the atrocities by the Ethiopian government. Having observed the reluctance by the United States, the Ethiopian government continued with massive atrocity crimes in the state of Oromia. These statements cleverly avoid the need for involving political actors in the said dialogue. It is very well known that the situation calls for more than a dialogue at this stage—a possible change of system or a comprehensive negotiation of a transitional order involving all political actors with opposing ethno-nationalist agenda. Activists on social media tweeted to the White House, the State Department and Ambassador Samantha Powers and demanded a more concrete action that would lead to holding the regime accountable.

Britain has also expressed concern through its member of parliament. James Duddridge, member of the UK Parliament, posted a message on Twitter saying that he, “raised concerns with Tedros Adhanom [Ethiopia’s MFA] about Oromo protests—important for authorities to exercise restraint and address the root causes.” This expression of concern on social media is welcome, but it raises a question as to whether the United Kingdom has any concrete plans to hold the government it helps finance accountable over killings and other forms of crimes against humanity in Oromia and all parts of Ethiopia. Social media activists pointed out to the UK MP that expressing concern will not alter the violent behavior of the Ethiopian government toward Oromo civilians. Activists cited that the killings continued after James Duddridge expressed concern. So, the concern did not have any impact on the behavior of the regime.

However, except for issuing foreign travel advice in Ethiopia to protect its citizens, the British Home Office has not issued a statement condemning the excessive use of force against Oromo civilians. Like the U.S., the U.K. has no publicly-available plan with which to hold its aid darling Ethiopia accountable over massive human rights abuses. The British Department for International Development has kept pumping aid into Ethiopia without accountability mechanism in place regarding how this aid would be used.

Although asking favors is not a bad thing, the Oromo people are not asking the West to do them a favor when they protest in Western cities such as Washington DC, Seattle, Minneapolis, Ottawa, London, Berlin, Melbourne and so on. They are asking for the withdrawal of foreign aid or the conditioning of aid on the protection of human rights because they believe currently the Ethiopian government is using foreign aid to finance its military campaigns in civilian quarters in Oromia and Ethiopia. Oromo demonstrators in the United States, Canada, and at the United Nations headquarters in New York City, demanded them to stop supporting “tyrannical Ethiopian government that is killing children in schools, colleges and universities across Oromia.”

The United States is not committed to democracy and human rights in Ethiopia despite decades of paying lip service. Nothing speaks louder about America’s lack of commitment to human rights and democracy in Ethiopia than US President Barack Obama infamously calling the current one-party totalitarian Ethiopian government “democratically elected,” during a visit to Ethiopia. The US government does not have a detailed plan with which to hold the autocrats in Ethiopia accountable. It is certain that expressing concern will not stop the ethno-partisan government of Ethiopia from carrying out its habitual and planned atrocities against the Oromo people.

In Oromia, none of the perennial questions raised by millions of Oromo marchers in hundreds of cities and villages have been answered so far. The Ethiopian government has not bowed to international laws, its own constitution, and toothless expressions of concern and condolences from Western diplomats and politicians over killings.

Since December 15, Oromia civilian administration has been illegally suspended in Oromia and Oromia has been brought under military rule. The Oromo people were declared “terrorists, witches and devils” by Prime Minister Hailemariam Deslagn and Information Minster Getechew Reda and centrally-coordinated merciless military actions were threatened and acted upon. Henok Gebissa, a visiting international law fellow at Washington Lee University School of Law in Lexington, Virginia, writes about the military occupation of Oromia as follows: “The current military control in Oromiya exactly resembles the famous Nazi Law known as The Third Reich of 1933 that Nazified all German law in order to grant arbitrary power to Hitler to detain and convict Jews.” In this case, the military is giving arbitrary power to elites of Tigrean Peoples Liberation Front ruling Ethiopia. Gebissa also described growing humanitarian crises where, in addition to all schools in Oromia, the government has deployed the military to hospitals in order to prevent injured individuals from getting medical treatment. People are left to die in the streets from bleeding caused by gunshots.

The first step in finding solutions to questions of land ownership and self-rule raised by the Oromo protesters is to stop the killings. Stop firing live ammunition into crowds of innocent school children with backpacks. But so far international actors have not demonstrated the will to stop the killings, let alone find a solution to politico-survival questions raised by the Oromo people.

The Oromo people have not taken the government announcement that it’s going to cancel the master plan as credible because they know that there is no written document to prove that it has canceled the plan. They also don’t trust the ruling party which was ordered to make the statement to dampen the protests and to curtail international media interest in the ever-deepening crisis. The Oromo upgraded their question to the question of national self-government, democracy, justice and release of all political prisoners.

Making over 45 million people in Ethiopia, the Oromo in the homeland and in the diaspora are asking Western partners of the Ethiopian government to at least choke the flow of aid until they (international actors) come up with plans to end pervasive violence and to ensure the creation of a new democratic order that respects the will of the people. Cutting aid to Ethiopia is no simple action since aid accounts for a good half of Ethiopia’s budget and obviously a significant part of that budget is funding the military being used by one group to persecute non-coethnics with the current rulers of Ethiopia who do not represent the Oromo or the rest of the country.

The international community must also urge that journalists, media, human rights organizations, humanitarian organizations and independent observers have access to Ethiopia in general and to hotspots of unfolding crises such as Oromia, Ogaden, Gambella and other regions needing urgent humanitarian help in particular.

The Ethiopian government thrives on massive surveillance and information control whenever it engages in massive atrocities internally. Human Rights Watch’s Ethiopia researcher, Felix Horne writes profoundly that it is such monopolistic control over information by government that has rendered the “massive crisis” invisible to the world. Horne’s recommendation to Ethiopia’s partners: “But they should also be clear that Ethiopia needs to ensure access to information and stop disrupting telecommunications and targeting social media users. The world needs to know what is happening in Oromia—and Ethiopians have a right to know what is happening in their country.”

Simon Allison writes that “Ethiopia exploits AU role to suppress international criticism,” including surveillance on AU activities by the National Intelligence and Security Service of Ethiopia. As result, AU has been effectively prevented from saying anything on Oromo protests.

If the Ethiopian regime continues to deny access to affected regions, the world is correct to assume that Ethiopia is hiding crimes against humanity against the Oromo people and others. The denial of access to information has made it difficult to assess the real magnitude of the crisis although it’s clear the crisis is massive. Number of people being killed by the government is increasing, but the world does not know about it. Death tolls cited in this piece are minimum estimates and they are just the tip of the iceberg as far as the atrocities by government forces are concerned because the regime intentionally prevents any “negative news from coming out of Ethiopia.”

* Habtamu Dugo is Adjunct Professor of Journalism and Communications at Howard University, Washington DC. He is also member of the OSA Board of Directors. He can be reached at hab.dugo[at]gmail.com