(source: ECADF) What are the driving factors of land grabbing? Who are the Investors? Who are behind the land grabs in Ethiopia? Where are the so-called marginal lands found in Ethiopia? How many hectares of these lands are allocated for biofuel crops production in the country? What are the most significant impacts of biofuel crops production on biodiversity and food security of Ethiopia? Should a country that is dependent on food aid be selling fertile land to developers to grow fuel crops? These are some of the most important questions that will be discussed in this article.

Land is one of the most important assets for people throughout the world. The issue of land is not simply an economic affair for Ethiopians. It is very much intertwined with everyday life of the people, their culture and identity as well. Currently, a number of biofuel and floriculture companies are operating in Ethiopia. The growing demand and support for biofuels in the United States and the European Union, has increased the competition for land that already impacted the food security of the country.

So far, the production of liquid biofuels has been viewed as an ideal solution for the growing world energy demand and to mitigate greenhouse gas emissions. It has also been said that the production of biofuel crops can be sustainable on “marginal” lands without competing with food crop production and the risk of losing the biodiversity. But a closer look at these “marginal” lands tells a different story. In most cases in Ethiopia, lands defined as “marginal”, “wasteland” or “idle” are vital for the livelihoods of small-scale farmers, pastoralists and other indigenous peoples.

Furthermore, over 80 percent the biofuel projects in Ethiopia are happening in arable lands, virgin forests and woodlands. This means that in reality, biofuel businesses can hardly become sustainable and competitive on degraded lands. A number of studies indicated that fertile arable lands and virgin forests are being cleared and allocated for biofuels development projects without any consideration of their potential impacts on the environment and its consequences on food security (Hilawe and Yohannes, 2008). As a result, the increasing commercial interest in farmland, particularly for the purpose of plantation agriculture has become the subject of much debate in the public and political arena of Ethiopia.

But still, the acquisition of large-scale lands for biofuels crop production is considered as a development strategy by the regime in Ethiopia. On the other side, different sources indicated that after destructing the ecological system of the country, many of the biofuel projects in Ethiopia failed because of false expectations, mismanagement or lack of economic viability of the biofuel feedstock (Heckett and Aklilu 2008). More recently, the failure of Karuturi Global Limited, one of the largest foreign companies engaged in commercial farming is a clear manifestation of the reality on the ground.

The table below shows partial list of biofuel companies operating in Ethiopia. Most of these companies are engaged in the production biofuel crops such Jatropha, Castor bean, Palm oil, sugar cane, Sesame and so on. According to the table below, at least 87 biofuel companies have already secured 3,791,602 hectares of land between 2005 and 2012 almost in all regional states in Ethiopia except that of Tigray.

Tigray as the home region of the ruling party of the Tigrean Peoples Liberation Front (TPLF) is spared from the land grabbing policy. The lease term made by these companies vary between 25 and 99 years with a price as cheap as the price of a Newspaper. This makes Ethiopia the only country in the world in which large-scale land leasing considered as a development strategy. The 2007, Biofuel Development and Utilization Strategy of the EPRDF regime were formulated to facilitate large-scale land deals in the country for biofuel crop production at the expense food crops and the environment. Furthermore, the biofuel programs in Ethiopia are export-driven and influenced by external policy agencies mostly from India, China, EU and the USA. This is a sufficient reason to consider the EPRDF as a Neoliberal and rent collector regime. And the combinations of the two have resulted in destruction of the biodiversity of the country. Webb and Coates (2012) confirmed that land-use change resulting from increased biofuel production exacerbates the risk of losing biodiversity and ecosystem services and causing net increases in greenhouse gas emissions. As a result, Indigenous communities that were using these biodiversityrich lands for food, income, grazing and medicine now become increasingly prone to famine.

From the data in the Table below, among the regions in which land grabbing occurs: Oromia, Gambella, SNNPR, Benishangul and Amhara are five of the most seriously affected regions respectively. There are also biofuel companies that operate in multi-regions, for which a total of 965, 020 hectares of land is allocated in two or more of the above mentioned regional states of the country. In general, the data in the Table below only shows the tip of the iceberg. Access to accurate information about the extent and nature of large-scale land grabbing in Ethiopia is extremely limited. Since the deals are surrounded by negative impacts and extreme lack of transparency the dealers always try to the best of their knowledge to hide the acquisition as much as they can. Most of the Biofuel companies that involved in land grabbing don’t have humanity and moral values when they are snatching the land of the poor and cause serious damage to the environment. This is genocide against humanity and biodiversity of the country.

Based on the discussion above, it is possible to conclude that land grabbing for biofuels is the most serious national issue in Ethiopia. More than 87 biofuel companies from 25 different countries are operating on 3,791,602 hectares of land between 2005 and 2012 almost in all regional states in Ethiopia except that of Tigray. This makes Ethiopia the only country in the world in which large-scale land leasing considered as a development strategy. However, its consequence will damage not only the social system of the society but also the biodiversity of the country. Such kind of serious national issues need the attention of all citizens. It is an alarming call for all of us regardless of our political differences. It is not too late to stand against the ongoing destruction of our country by neo-colonizers and their servants in Ethiopia. 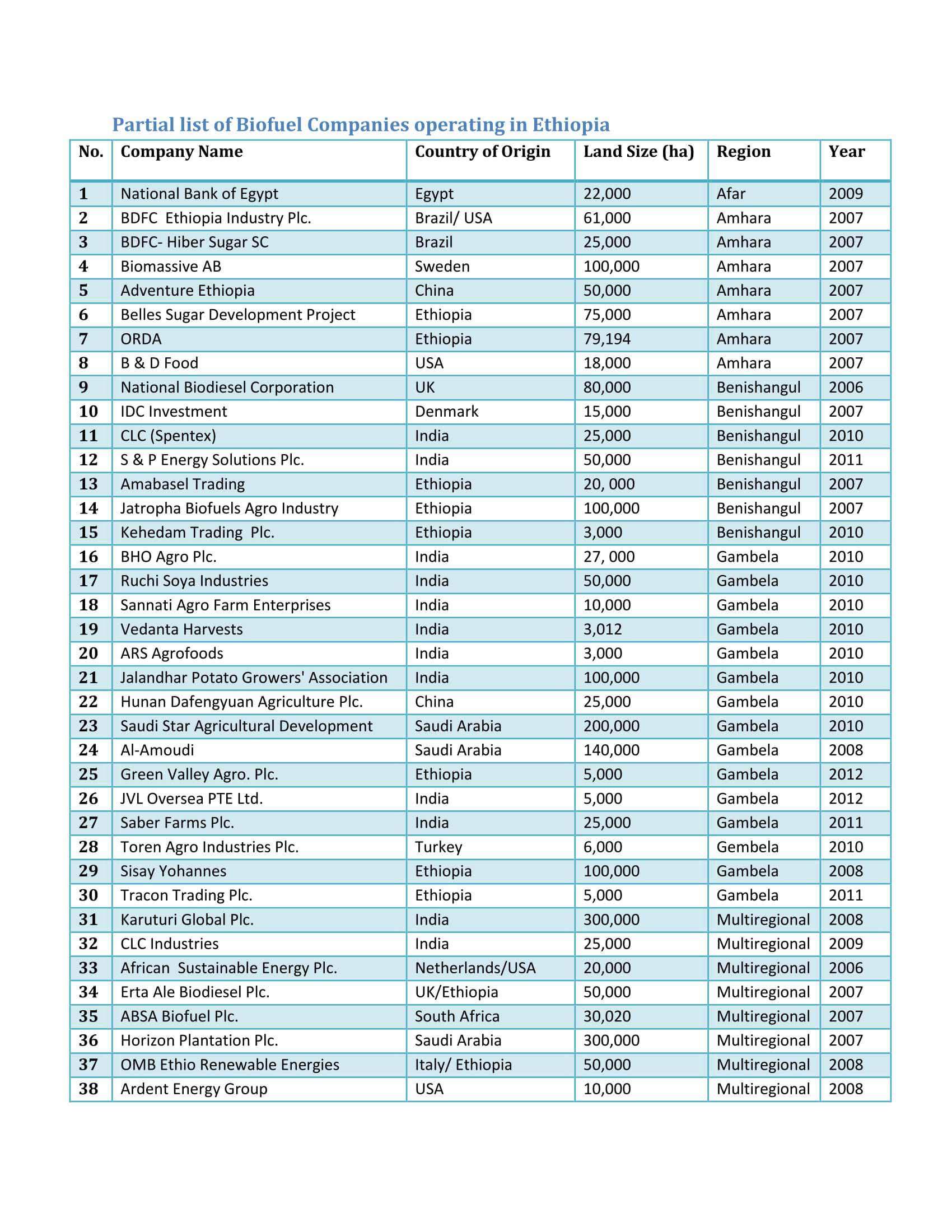 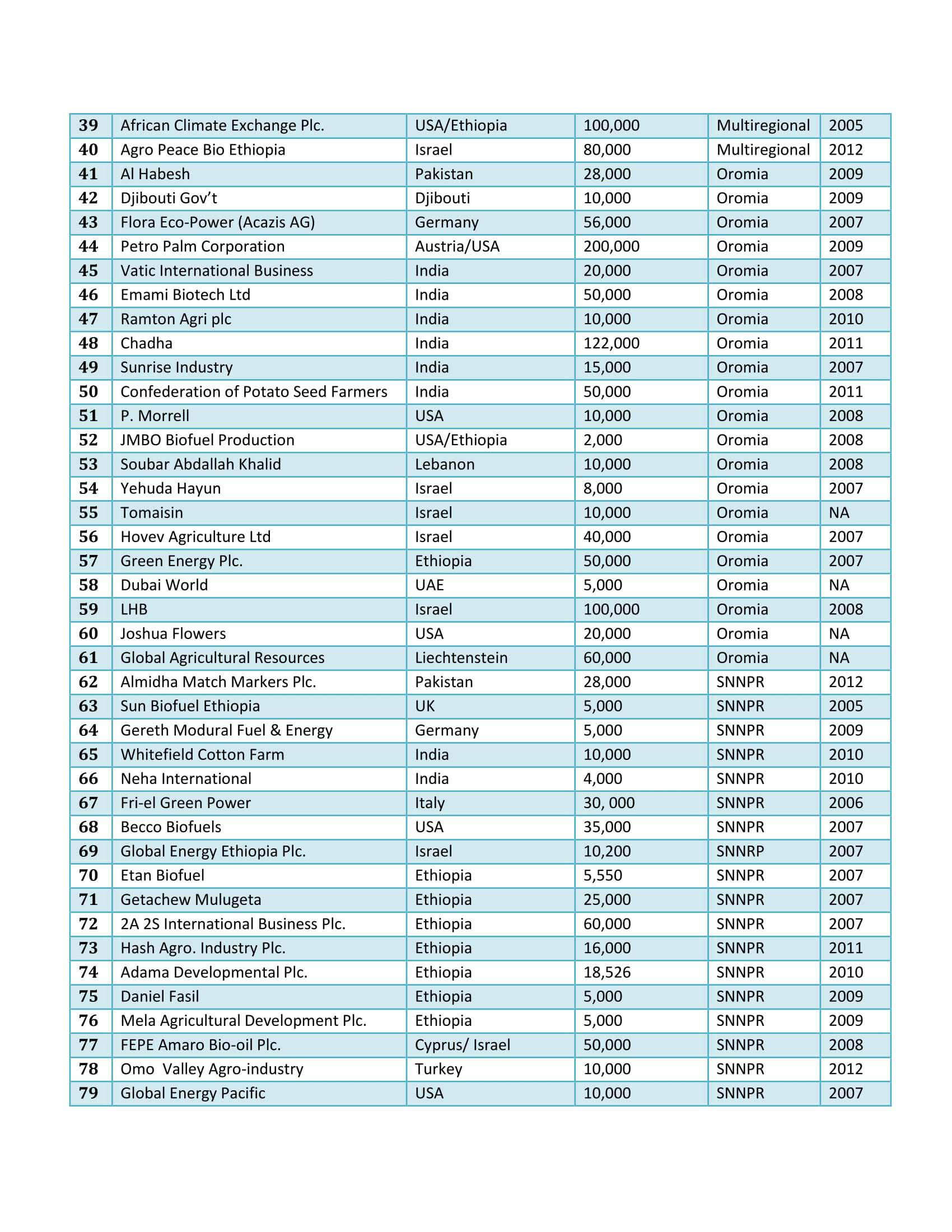 Announcement from Robe Media Network (RMN), a call for thought